You are here: Home / Before and After Photos / Weight Loss Story of the Day: Lauren lost 78 pounds

Weight Loss Story of the Day: My Sigma Gamma Rho Soror Lauren lost 78 pounds. I was very inspired by her story of battling obesity since childhood and finding victory over the last 5 years.  Her journey shows that you can overcome years of yo-yo dieting and bad eating habits.  Read her story below to find out how she did it: 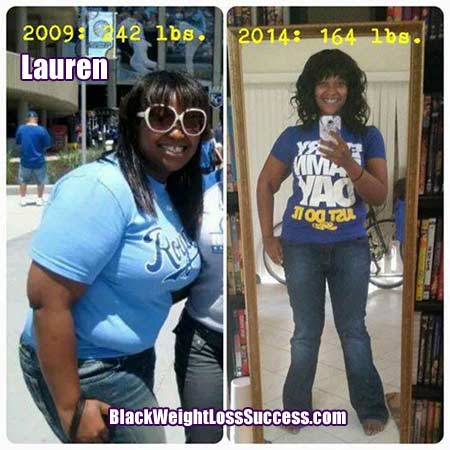 “My battle really started 20 years ago when I was nine. The growth plate in my hip started slipping due to my weight. I had to have three different surgeries involving pins in my hip so I could support the weight. For every surgery, I spent three months in traction. This led to me being 200 lbs by the time I was 12 years old. I went through my teen years and the first part of college steadily gaining weight. I also didn’t help matters by constantly eating out and then NOT working out. Yes, I was the girl who “didn’t want to sweat her hair out.” (Yuck. So glad I’ve changed my thinking on that!) I finally got tired of being the girl who sat by and watched her friends try on dress after dress while I was stuck to either Lane Bryant, Torrid, or men’s clothing. I dabbled in “quick fix” diets and struggled with my eating (from either binge eating or not eating). I would lose 20 lbs in three months just to be smacked with 40 lbs later because I wasn’t consistent with my habits.

At my biggest, I was a size 22 and weighed 242 pounds. I began a lifestyle change at 26 years old after marathon watching “The Biggest Loser.” After quickly telling myself not to expect the results the contestants got by working out with trainers like Jillian Michaels because I had a full time job as a High School Teacher.  I couldn’t commit to the level of workouts they did on the show. However, I phased out beef, replaced chicken with Morningstar Farms entrees, and learned how to cook different types of fish. I made it a point to eat at least three meals a day, because before my change, I was a habitual breakfast-skipper. I replaced soda with water with fruit slices. I also learned how to control the size of my portions. In Texas, “portion control” is a foreign phrase to us, lol. I worked out with Jillian Michaels DVDs and took up boxing. My favorite workout was when I found bikram yoga. Not only did it challenge my body, but it helped manage my stress. When I met my current boyfriend, he taught me how to ride a bicycle. That’s helped the most. I started walking a little each day and eventually worked my way up to jogging. I’ve done three 5Ks, but I don’t consider myself a true runner.

Currently, I weigh 164 pounds. I’m around a size 8/10 in clothing today. My transformation has taken five years, but that’s because I wasn’t consistent. That’s the biggest piece of advice I can give to any woman who’s starting (or continuing) her journey: BE CONSISTENT. Also, don’t beat yourself if you fall off. My ultimate goal is to be 100 lbs. lighter–142 lbs. by January 20, 2015. I can’t think of a better 30th birthday gift to myself.” 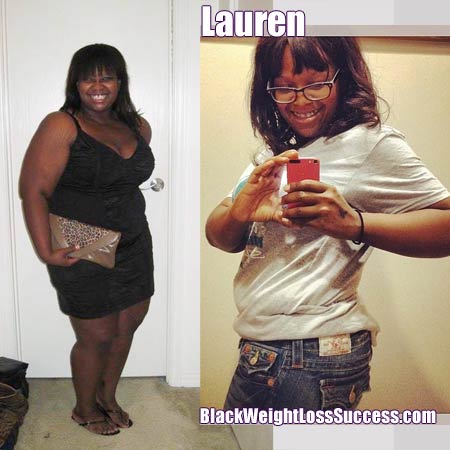