You are here: Home / Before and After Photos / Sondra lost 87 pounds

Sondra lost 87 pounds. This Zeta Phi Beta soror battled food addiction, yo-yo dieting and a number of weight-related medical issues. With a great support system backing her up, she began her journey with prayer and researching her options. Her hard work has paid off and now she’s sharing how she did it. 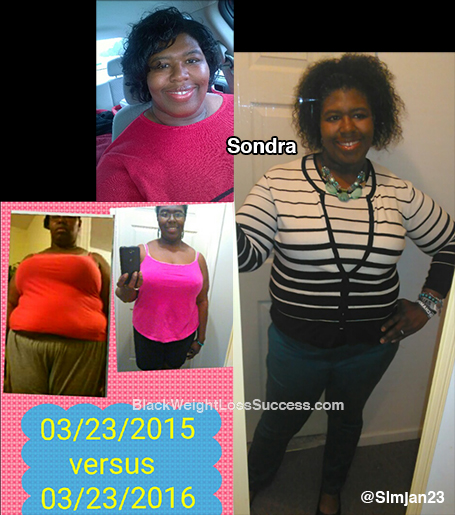 I was addicted to food for many years and I took control of it after going to Overeaters Anonymous in 2009. However, when I stopped going, I fell right back into my old habits. Throughout life, I never experienced a day being called FAT; I’ve always been accepted for ME. I hid behind a pretty smile and personality for the most part. The people in my support system eventually took the time to say it was time to do something about my life, not for cuteness or vanity, but for MY health. I did not take their concerns for granted. I was tired of the yo-yo dieting, trying every fad that came along and losing weight just for special events. I was also faced with high blood pressure, high cholesterol, PCOS and diabetes.

I started this journey by praying and researching what was best for me, but just couldn’t find anything. I began my journey at 348 pounds January 2015 and lost weight by replacing meals with green smoothies from the BlackWeightLossSuccess blog, but I did not follow through and found myself off track in March 2015.

My co-worker introduced me to a drink called Spark for energy when exercising and greater focus. That was the kick off towards what I now call “MY SUCCESS STORY”. I began the AdvoCare 24 Day Challenge, with clean meal planning, exercising and taking supplements to enhance my metabolism. I was focused, used appetite control and also used meal replacements. My meals went from fried food and eating out at buffets to meal prepping and using Olive Oil to bake my foods. I was also boiling and sautéing my foods. I began eating at home more and wasn’t ashamed to leave food on my plate, even if it meant being different.

My exercises included Zumba, walking, treadmill and the Ab Lounger. I also did Mindfulness exercises.

I currently weigh 261 pounds at 5’10” tall. It took me from March 2015 until September 2015 to lose the weight. I have kept off 87 pounds by continuing to have a zeal for a healthier lifestyle. (I included clean eating and drink green smoothies, which I got from your website.)

I encourage people that don’t know what to do about their weight loss to take the time to challenge themselves. Explore the footprints of the successful journeys of others and strive for a healthier lifestyle, not just a temporary event. I began just like you are doing today; reading someone else’s success story for motivation.​