You are here: Home / Before and After Photos / Marlo lost 100 pounds

Transformation of the Day: Marlo lost 100 pounds. Weight loss surgery did not work for this proud mom long term. In fact, she faced life threatening complications. After she recovered from that ordeal, she went cold turkey with her eating habits, started drinking green smoothies and exercised regularly. Check out what she shared with us about her journey. 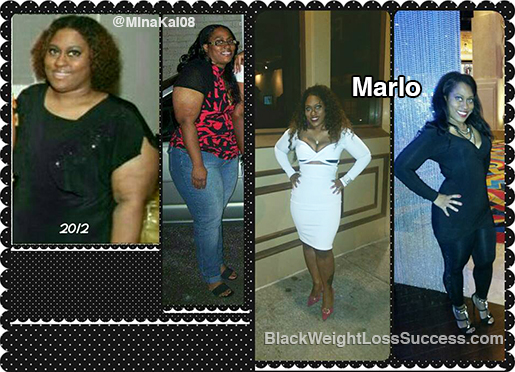 That was me a little under 4 years ago (before photo). In 2007, I decided to have weight loss surgery because I wanted a solution I thought would be a quick and easy way to finally lose weight and keep it off. I had the Lap-Band surgery and I lost about 50 pounds. In addition, the doctor had me taking Adipex (an appetite suppressant containing Phentermine), which is terribly unsafe.

Then, I became pregnant with my son. I gained most of the weight back that I’d lost. I was able to lose some pounds after I gave birth to him, but later on I gained even more. The Lap-Band was giving me all sorts of problems and I just wanted it taken out. I was up to 250 pounds by then, so I had the band removed.

This was supposed to be a simple surgery where I would be out the next day. The problem was that the Lap-Band had kind of fused with part of my stomach and the surgeon royally screwed up trying to remove it. My stomach formed a stricture: it basically twisted into a knot making it impossible to digest anything. I was in and out of the hospital for 4 months and I couldn’t eat or drink. I had to be on tpn-iv nutrition for nearly 4 months. I had to see a specialist surgeon to fix what the first idiot screwed up. Going through that entire ordeal scared me beyond belief, because I almost died.

When I was finally able to eat and drink again, I totally changed my diet and went cold turkey. I cut out sugars and carbs for 6 months. I am a smoothie junkie! I make a lot of smoothies packed with fruits, vegetables and greek yogurt with added protein. My favorite smoothie is baby spinach and kale, strawberries, pineapples with tropical greek yogurt. It fills me up and gives me the energy I need to start the day. One thing that works for me is that I don’t deny myself little treats sometimes, but I’ve mastered portion control. If I want a root beer float one day, I order a kiddie size, which is about 4oz.

I’m a mom of a 7 yr old boy. I also work and attend grad school, so my schedule can be hectic. I try to workout at least 2-3 times a week. I have an elliptical machine at home and I use that most of the time. I love dancing and Zumba and will even get my son in on it as well! I would like to get into a gym to do some weight training and toning soon.

I’m not knocking anyone that has had weight loss surgery. I just want people to know that weight loss surgery isn’t always the only option. If I had exercised, ate right and kept with it, I never would have had to go through that horrible, traumatic experience. And for what? For nothing. Losing weight and adapting to a healthy lifestyle isn’t easy, but it’s totally worth it. If I can do it after 32 years of bad eating habits, failed surgeries, etc, anyone can do it!