You are here: Home / Before and After Photos / Alisha lost 138 pounds

Transformation of the Day: Alisha lost 138 pounds. This survivor works to change the lives of homeless Veterans at her day job. She wanted to share with us how her decision to have weight loss surgery saved her life by helping her doctors find a serious, life threatening condition. Check out her awesome story. 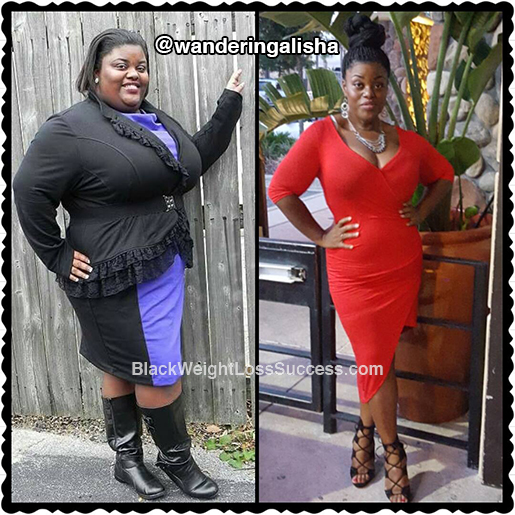 I wanted to share my story of losing 145 pounds through surgery and how it saved my life. Through pre-operative testing for weight loss surgery, I found out that my thyroid was enlarged and crushing my trachea. I later found out that I had thyroid cancer, which had spread to my lymph nodes.

What was your motivation?
I was motivated to lose weight because I wanted to be the healthiest/best version of me and for me that wasn’t being 300+ pounds. I was inspired by my clients. I work with homeless Veterans and after years and years of homelessness and other issues, I can’t expect them to change overnight. Change is very difficult. Deciding to change behaviors, ones that I’ve had almost my entire life, was difficult, but I had to start somewhere.

I had weight loss surgery after several years of plateaus. I didn’t how to overcome the plateaus, so I sought information on surgery because it was covered by my insurance. During my prep-op work, up it was found that my thyroid was crushing part of my trachea. However, because it was not causing any serious issues we proceeded with surgery. I had the Duodenal Switch with Dr. John Rabkin in San Francisco at Pacific Laporscopy.

6-7 months after weight loss surgery, I went to my new primary cary physician for a work up and was referred to an Endocrinologist. My endocrinologist wanted to remove my thyroid because it was so large.

While preparing for surgery to remove it. My lymph nodes looked suspicious on one of the tests. After a biopsy of my thyroid and surrounding the lymph nodes, it was found that I had thyroid cancer. My surgeon explained to me after surgery that had my trachea collapsed I probably would have died due to the size of my thyroid. My thyroid was the size of 2 fists and wrapped around my trachea. The icing on the cake was that a year and half before my surgery, I contacted my previous PCP to discuss my enlarged thyroid. She brushed me off, giving me the once over and saying, “Nope, looks fine to me.” Despite all of that I’m alive, healthy, and continuing to live a full and blessed life.

How did you change your eating habits?
I started using My Fitness Pal to decide how many calories I needed to eat a day to lose the weight that I wanted. 1700 calories was my goal. That was actually “more” intentional food than I was currently eating. I became most successful with my food habits by doing meal prep on Sundays. I would take 2-3 hours and make all my meals and snacks for the week. I didn’t eliminate many foods as much as I counted my calories. I prefer a big steak over a candy bar, any day. I now follow a high fat, high protein diet that aligns with my weight loss surgery.

What did your workout routines look like?
All I did was walk. I did anywhere from a mile to two miles a day at a leisurely pace, nothing too much. I’m still intimidated by the gym but I continue to walk and I’m currently looking for a personal trainer to help me lose the last 20-30 lbs and tone my body.

What was your starting weight? What is your current weight?
My starting weight was 333 pounds (approximately). My current weight is 195 pounds and my height is 5’5″. After having my thyroid removed on 2/6/2015, I’ve only lost about 4 pounds. However, I’m not gaining weight, which is what most people say happens after having their thyroid removed and trying to find the right dosage of medication. In addition, on January 29th, 2016 (my birthday) it was confirmed that my cancer had returned. I’m currently waiting on the results, but hopefully I’ll get another negative test.

How long did your transformation take?
It’s been about 2.5 years

What advice do you have for others who want to lose weight?
Believe in yourself and don’t give us. Celebrate the smallest victories and keep pushing forward toward your goal 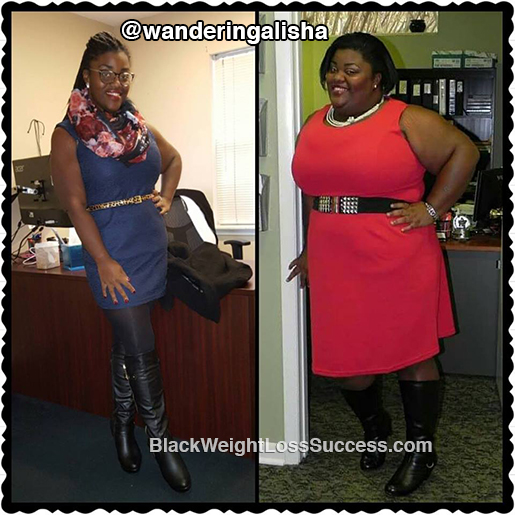