You are here: Home / Before and After Photos / Jessica lost 91 pounds

Transformation of the Day: Jessica lost 91 pounds. This AKA Soror had been overweight since childhood, but she was able to change her lifestyle by setting attainable goals, having great support system and never giving up. It’s taken 5 years of hard work and commitment to figure out what works best for her and she doesn’t regret the journey. Check out her story. 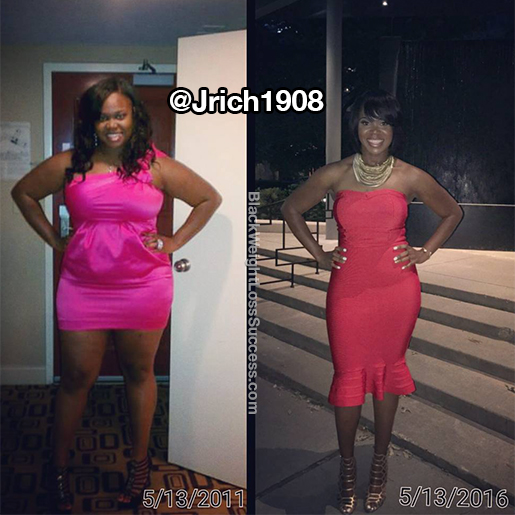 I’d always been overweight, starting around the age nine or ten. I had gotten to my heaviest weight after graduating from college. I was working long hours in California in 2011 and a co-worker told me to get a hobby. So, I started boxing, eating healthy and lost about 10lbs. I got released from working there and while at home for about two months, my mom pointed out that I had gained weight. About two weeks later, work sent me back to California and the same co-worker looked at me and said, “Are you still boxing?”. I knew he had realized the weight gain as well and I was embarrassed. I never cared what people thought, but at that moment it hit me and I took it personal.

It was right before my 25th birthday. I started the HCG diet that my friends had told me about. They are drops that suppress your appetite and along with them you eat a very low amount of calories. I did this off and on for about 5 or 6 months and dropped almost 40 pounds. The only problem was that there was no working out, so I would gain the weight back quickly whenever I picked up my old habits. So, I stopped using the drops, started working out and did a low calorie diet, as if I was still taking the drops in 2012-2013. Bad idea! Once again, when changed my habits I gained the weight back and I gained it back fast! I kept this up for about a year and just went up and down between 195 pounds and 210 pounds.

A friend of mine invited me to a boot camp in 2014 and I had to sit down after about five minutes. That’s when I knew I needed help. A few weeks later I reached out to the trainer who ran the boot camp and she started training me. I got great results with her, however, my eating and drinking was not consistent and I never achieved the results I wanted. My goal was 170 pounds and the lowest I got to was 182 pounds. Once my trainer moved in 2015, she referred me to another trainer and I carried over the same habits.

Between the vacations, brunch with friends and drinking, I was holding myself back and spending a lot of money. So, after months of working with him, and reaching the lowest weight I had seen at 179 pounds, I decided to fast for one month. No eating out, no drinking or going out. Just work, church and the gym. In that month, I lost 12lbs and met my goal of 170 lbs. I learned so much that month about the people who truly supported me and all the distractions I had around. You have to have a strong support system. Not just family, but also friends who will make sure you’re in an environment that will help you will stay committed.

I’ve always wanted to run a 5k, but I would get shin splits. I was told that I would have to lose weight to stop the shin splits. Then my knee started giving me problems and my family has a history of knee problems. I just felt like everything was holding me back. My 30th birthday was approaching this year and I made a goal that I would run a 5k and get to 170 pounds for my birthday. My family and friends kept me encouraged and even started working out with me. I was able to complete a 5k, running straight through, two weeks before my birthday and weighed 164.9 lbs on the day of my birthday.

Confidence was never an issue for me, but I’ve inspired so many people that it’s kept me motivated to maintain this lifestyle.

Give us some additional detail on how you changed your eating habits?
When I started working with my first trainer she would prepare my meals and I learned to eat 5-6 times a day. I stopped losing weight at one point and it was because I wasn’t eating enough. At first, it felt like I was overeating but now it’s natural. My second trainer gave me meal plans, so now that I am on my own I’ve picked up eating habits from both of them. I stay away from bread, white rice, sweets, alcohol weekly, sodas/juice and really focus on eating only what I meal prep for the week. My meals include protein shakes or egg whites and spinach for breakfast, a healthy snack, carb/protein and vegetable for lunch, healthy snack, carb/protein and vegetable for dinner and possibly a healthy late snack, if I’m hungry. I eat every 2.5-3 hours and drink half my body weight in water daily.

I’ve lapsed many times over my five year journey in terms of eating, and I still have my moments, but it’s the getting right back on track that has helped me be successful. I’ve also found healthy snacks I like. I love frozen grapes and quest bars. These fulfill my sweet cravings. I also, only keep the food I know I should be eating in the house. If I treat myself to anything, I never buy enough that I have to bring it home where I may be tempted to eat more.

What did your workout routines look like?
I worked out 4-5 times a week. I would do minimal cardio, only for warm ups, and primarily weight training. I also did a lot of sprinting to help me getting under my 185 lb plateau. Every day was a different focus, so an example would be arms Monday, cardio Tuesday, legs Wednesday, cardio Thursday and the back Friday. Every day would also consist of some type of abs workout. Before I worked out with a trainer, I would go to spin classes at a local gym.

How long did your transformation take?
I started my journey April of 2011 and it has taken me about five years to really find a routine that works for me and my lifesyle. I wouldn’t change the journey for anything.

What advice do you have for others who want to lose weight?
Make sure you are doing it for yourself. When I was in college, I dated a guy who had an issue with my weight, so he cheated and wanted me to have a video model body. Because of this, I had no interest in losing weight. It was as if I was doing it to make him even more mad. So, make sure it’s for you!

Have a strong support system. Friends and family can be a distraction if they don’t support your goals. Surround yourself around people who will tell you no when you pick up the donut or who suggest salads over pizza.

Set small goals. No matter what I did, I always had a 15-20lb goal I wanted to get to but I also had an ultimate goal in mind. If you focus on your ultimate goal you can get discouraged, because everyone’s journey looks different. Don’t get discouraged. Stay focused. Don’t compare your body or results to anyone else. Enjoy the journey because it’s so worth it 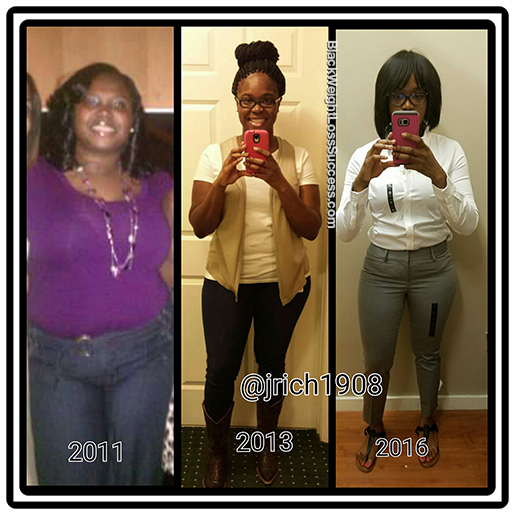