You are here: Home / Before and After Photos / Lisa lost 59 pounds

Weight Loss Success Story of the Day: Lisa lost 59 pounds with programs like the YMCA’s Diabetes Prevention Program and Weight Watchers.  She also embraced walking and jogging.  Read about how she lost the pounds and beat a diagnosis of pre-diabetes: 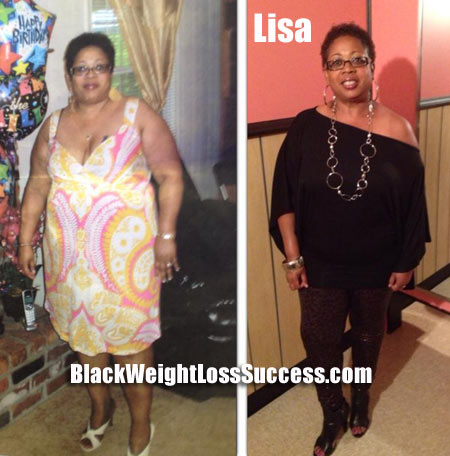 “The company I work for started a wellness program in March of 2012, which included wearing a pedometer and tracking your daily steps, as well as submitting blood work to check your glucose and cholesterol levels. I began the wellness program weighing in at 234 pounds. I was “moving”, but not losing, which was kind of discouraging. My blood work showed that I was in the pre-diabetes stage. My insurance company United Healthcare started sending me information on the YMCA’s Diabetes Prevention Program. I joined the 16 week Program on July 11, 2012. This program is offered nationwide and United Healthcare paid the enrollment fee. I weighed in at 226 pounds and I’m happy to report that I lost a total of 26 pounds and I am no longer pre-diabetic. Unfortunately, once the program ended in October 2012, I saw the scale creeping back up, and I gained 3 pounds. So, decided to join Weight Watchers in December 2012 to help me continue to lose and maintain a healthy lifestyle. I weighed 203.6 pounds at that time and my company joined another wellness program Virgin HealthMiles in January 2013. I have lost a total of 59 lbs. since March 2012, I currently weigh 175 pounds.

I have so much more energy, I hate that it has taken me 20+ years to “finally get it”. I was never a morning person, but now I’m proud to say I rise six days a week at 5:30 a.m. to meet my best friend Melinda Cheshier for an hour of walking. We even walk a nice casual stroll over lunch. I have even started jogging, using the app C25K (Couch to 5K). I am just beside myself and there is more for me to accomplish. I’m 3000 health miles from entering the final stage of the Virgin HealthMiles program. You earn cash for each stage (there are five stages). I’m in the lead of all my co-workers (there’s 23 on staff). It should normally take a person a year to complete all five stages, but I’m almost there in 9 months. My office nominated me in the Westin Hotel’s “Better Monday’s Wellness Program and I won. I was the first recipient for this new program. The Westin staff presented me with some cool prizes: I won a new pair of New Balance tennis shoes, a nice back pack, a Better Monday’s t-shirt and an overnight stay in a King Plaza Suite, which includes valet parking and breakfast at Shula’s Steakhouse.

Folks are constantly asking me “what are you doing”? My response is “ACTIVITY”, the key to better living is to become active and control your portions. If you watch what you eat and try to move most days of the week, you are on your way to better living and a healthy lifestyle. I have even gotten my husband exercising and eating healthy. He has lost 20 pounds; he’s walking at work on breaks and is now wearing a pedometer. He’s all set up with his own pedometer and IPod. When I see him accomplishing 12,000+ steps a day, it does my heart good.

I’m spreading the word everywhere I go on how getting up and moving does the body good. I wouldn’t walk a block before and haven’t ran since I was in my teens, now you CAN’T STOP ME!!!  Thank you so much for listening to my story