You are here: Home / Before and After Photos / Nelly lost 40 pounds

Transformation of the Day: Nelly lost 40 pounds. She connected with a holistic health practitioner who taught her how to detox and put her on a custom health transformation program. This Psychotherapist, Holistic Life Coach and Sexuality Educator has transformed mentally, emotionally and physically. Check out her journey. 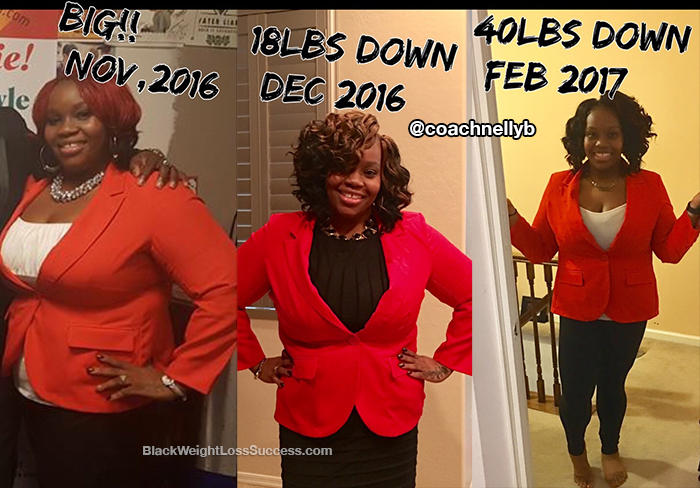 After struggling with being on an emotional roller coaster for years which contributed to constant weight gain, this holistic program has taught me to live mindfully. I’ve learned to love and honor myself enough to invest into being a healthier me. It’s been all about detoxing (internally/externally), meditating, journaling, cardio, and mindful living. Today, I stand before you 40 pounds lighter, with stable mind, body & soul, and heartier than ever before.

Coming from a family of heavy people, being big was a norm for me. I was always the “smallest big” one of my family so I was content. However, I was no longer content after having a child and gaining more weight than ever. I was also dealing with the emotional rollercoaster of wearing so many hats, being a single mother, helping everyone else fix their life, and not being able to fully enjoy mine.

In 2014, I became a Licensed Clinical Social Worker and started my own holistic counseling & coaching business (Moxie Living Counseling & Coaching). I mastered how the mind functions and affects the body, but it became clear to me that my full healing wasn’t just about my mental state. I mastered my emotions and mental well being but was neglecting my physical body, which began to stop my progress of full healing. I began to have medical issues, like back problems and swelling in my foot which impaired my ability to walk (the doctors could not understand why). I wasn’t able to interact with my son the way I really wanted to at amusement parks, playing sports, etc. I felt like the world was on my shoulders literally. I felt heavy and always tired.

On November 30, 2016, my co-host introduced me to my holistic health practitioner, Ms. Ladonna Graham. She was a guest on our radio show. During the show, she discussed the importance of detoxing, internally and externally. She began to talk about the toxins that are in our body that cause weight gain and the water/food we eat that adds to toxicity to our bodies. She also talked about the importance of detoxing every 3 months, just like you change the oil in your car in order for the car to run correctly. It was like I had an epiphany. I was broken down and didn’t realize that I was running on fumes!  I’ve been doing well mentally and emotionally (or so I thought) but putting toxic oil on top of old oil. In the past, I never changed my eating habits, never worked out and NEVER DETOXED, so I was broken in more ways than I knew.

After the show I met with LaDonna and discussed some of my concerns. She immediately started me on a 8 week health program customized to my desired outcome All of her programs are customized to the clients needs. This program consisted of detoxes, internal & external, and natural, veggie-based protein shakes (I drank them 2 times a day at least). I completed numerous ionic foot baths, which detox toxins from the body through the feet. I also had Hydro Colontherapy.

I was only allowed to do cardio for exercise and I followed a strict meal plan. I cut out all carbs and only ate foods that are very low in sugar. During the detox, I ate unlimited veggies and a small portion of fruit because of the sugar. I was allowed to eat unlimited apples, because they are high in fiber. The only drink I have, other than the shakes, is water.

I am still on my journey today and have committed to making this a lasting lifestyle change. This journey has definitely taught me the importance of the mind-body-soul connection. This is something I always teach as a therapist, but never fully implemented in my own life until now. My advice to others is that Mindful living is more that just the awareness of our mental/emotional/ spiritual state, but it includes our physical state. Honoring ourselves is being mindful of our eating and what we’re engaging in sexually. It’s about being aware of what we’re putting into/allowing into our body, as it affects us holistically. We have to constantly honor ourselves and know that every choice we make is a reflection of how much we truly honor the greatness inside of us.

Live your best life with Moxie, because you’re worth it!