You are here: Home / Before and After Photos / Lesa lost 123 with weight loss surgery

Let’s show some BWLW love to Lesa who has lost 123 pounds.  She decided to have gastric sleeve weight loss surgery after dealing with a number of chronic health conditions affected by being overweight.  After dealing with the loss of her closest relatives and having to be put in a medically induced coma, she realized that she had to be here to support and love her children.  Here is what she shared with us about her journey:

I’ve always been overweight, as far as I can remember. It was “cute” when I was a chubby toddler and never shed any of the extra pounds. I grew up in an “overweight” family. I was raised by typical Black Country fed, homegrown, soul food grandparents. My mom was the type of woman who loved being a voluptuous woman and I inherited that gene.

I loved being voluptuous, plus sized, etc. it wasn’t until I realized that as I older, I got bigger. My entire adult life I was 300+ but by the time I was 37, I was up to 390 lbs.  Now with health problems, single parenting, losing close family members and juggling too much that I started having severe health problems; namely Sleep Apnea, Congestive Heart failure, low immune system, and Pulmonary Hypertension (which caused me to go into respiratory distress October 2010).

After being in a medically induced coma for 21 days I woke from the coma and my first thought was “Who took care of my babies?”  They already lost my mom and grandparents and were on the verge of losing me!!  My mom passed away at the age of 45 years old and it was heartbreaking to me and my children.  She had a multitude of health issues including diabetes, high blood pressure, & CHF that if she lost weight she might still be alive today.  I was finally diagnosed with Tracheal Stenosis after being hospitalized three times. Then, I had to have an emergency tracheostomy February, 2011. I was told by numerous doctors that I would have the trach for the rest of my life due to extensive scarring to my trachea from the intubation.

One of the medical specialists that told me that I would have my trach removed in December of 2012. My trachea healed. I discovered that Medicare paid for gastric surgery and in May 1, 2013 I had my first consultation. Initially, in 2009, I planned to get the Lap Band (I’m glad that things didn’t work out for me to get it). I researched the gastric sleeve and found people that had the surgery.  After months of planning I had my surgery October 31, 2013.

Weight Loss Surgery is a tool, not a miracle cure for obesity. It is our responsibility to make the right choices.  I sometimes start to eat things like I’m a trance.  Not realizing what I was doing until I’m in mid bite.  I’ve discovered that my comfort food and drinks aren’t so comforting.  Now, I love veggies, fruits and WATER. Lots and lots of water.  I do not get caught up in the scales. This is the one thing that I cannot stress enough. It is not good emotionally if you get all of your sense of achievement from the scale. I just keep in mind that this is a Marathon and NOT a sprint. My workout routine is walking. I walk everywhere and climb stairs.  Imagine me, a person who loves to shop having to use the motorized cart in Walmart or having to sit down while shopping at the mall…or flat out not going to the mall at all!  Imagine not wanting to go anywhere because your fat is basically insulation and you are constantly hot!  Now, I have energy and don’t mind cooking, cleaning, walking or climbing the stairs.

I’m still in transition and I’m only 9 months post-surgery and have lost 123 lbs. and my current weight is 267.  Initially, I wanted to be 225 lbs. or a size 18/20, however my ultimate goal is to just be healthy.  I recommend joining a support group as I seem to be having identity issues post-surgery.  I’ve always been comfortable being plus sized that now that I’ve lost weight I can’t identify with the person I see in the mirror.  Daily what I am thankful for is that I’m not plagued with health issues and I’m going to be around to be a parent to my daughters! 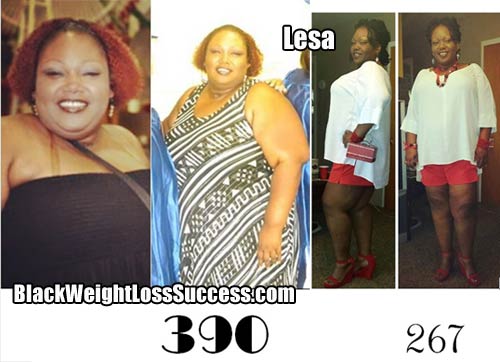