You are here: Home / Before and After Photos / Queing lost 85 pounds

Last month and last year around this same-ish time. So, yeah. Still cute or whatever. 😏 #shelifts #sheuplifts #shewontgiveup

– Weight Loss Transformation of the Day: Queing lost 85 pounds and has gone from a size 22 to a size 6. After being overweight in her 20s and 30s, she is now getting fit in her 40s. The most important factor in her success has been truly loving herself through this lifestyle change. Clean eating, workout accountability and great coaches have also been part of her journey.  Here is what she shared with us about how she did it… 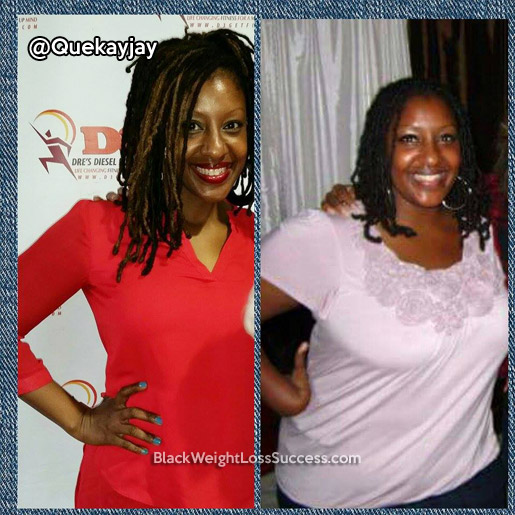 My weight loss journey has been off and on for about 4 years now. Like some of you, I would have success with losing 10-20 pounds, but then gain it all back again. Then I’d do nothing for another year or so. It wasn’t until summer of 2014 when I put a stake in the ground and rededicated myself to going all the way with the process this time.

I’ve been asked where my motivation came from. Looking back, I can see that it was birthed out of a very broken place. I felt so hopeless in some of the areas of my life. Through Godly counsel from sister friends (and also listening to inspirational teachings), I decided that I would be more compassionate with myself and treat me as if I were my own best friend. I would be good to me in every way. That included the way I talked to myself about myself and the way that I cared for my body.

My workouts started with just walking. This was good for my body and my soul because I would use that time to pray and plan. After a couple of months of walking, I noticed some ladies who were working out together in the park. I stopped to talk to them and learned that they had been training together for a while. I got the meet-up information from their trainer and promised to follow-up about joining them. About a month or so later I did it. I worked out with the group 3 times a week and begin to really enjoy group training. Also, before this, I did not understand the benefits of strength training. Now, my body was beginning to transform beyond weight loss as I was gaining endurance AND muscle! I worked out with that group throughout the fall and by the end of the year I was down 25 pounds.

At the start of 2015, I discovered a fitness boutique that specialized in weight training for women, Dre’s Diesel Dome (D3).  I came to D3 looking to take my body beyond where I could transform it on my own. I was struggling to break the 200 pound mark. Well, after only a month at D3, I had lost 13 pounds and was well under 200 pounds for the first time in over a decade! What I discovered was that the training, nutritional education, and sisterhood at D3 is what I had been missing. It would be these things that would help to radically transform my understanding of fitness, and also help others to begin or renew their own fitness journey.

Before my journey, my diet was mostly fast foods, junk foods, processed foods (stuff out of a bag, box, or can), and occasionally even so called healthy foods which were actually far from it. Those alleged healthy foods were high in sodium and/or sugars and very low in quality protein. When I started to eat less of the mess, I would have some success. That was just because I wasn’t eating enough. However, I would sabotage those crazy efforts by overeating on the weekends and trying to start over again every Monday.

By following weight bloggers and even success stories on BWLW, I would hear about clean eating. I did some Google research on it and realized that eating clean needed to be my next step if I wanted to get stronger inside and out. I chose more whole foods that I prepared at home (whole grains, fruits, vegetables, beans, chicken breast, etc. that has not been processed to death).  I chose to keep foods as close to their natural form as possible, basically without all the additives and preservatives. That’s when I started seeing changes that became lasting.  I lost more weight in the first 3 months of clean eating and working out than I had in 5 months of poor eating and working out.  And, thanks to BWLW, I have been able to continue to get clean eating recipes and grocery lists from the site.

My advice for others who want to lose weight is to start with cultivating a greater love for yourself first. When you love someone, you want to give them your absolute best. The same goes for ownselves. When we love ourselves tremendously, we will also be willing to be patient and compassionate with ourselves throughout the process. I would also encourage anyone who wants to lose weight to have a personal declaration confession, or scripture for daily motivation. Mine is 1 Corinthians 9:27 (MSG Version) – I don’t know about you, but I’m running hard for the finish line. I’m giving it everything I’ve got. No sloppy living for me! I’m staying alert and in top condition. I’m not going to get caught napping, telling everyone else all about it and then missing out myself.

I had been heavy for over 20 years. Overweight in my 20’s, obese in my 30’s, and now finally I’m getting fit in my 40s! You have what it takes to do this once and for all! Start now, not on Monday. Be merciful and compassionate towards yourself along the way. We will get there together. 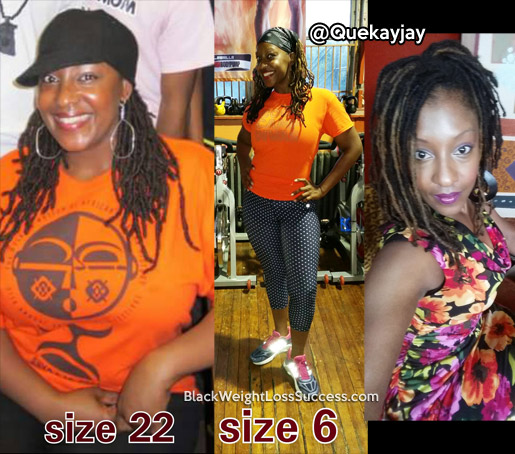 #TransformationTuesday On the left I was in the 220s, but soon after this pic my grandmama passed. That sent me into a whirlwind of emotional eating that led to an additional 30ish pounds. Now, on the right that’s ya girl just this past weekend. I’ve since learned (and practiced) to not give food the power of being my source of comfort. That was a process. Have you read, “Made to Crave: Satisfying Your Deepest Desire With God Not Food” by @lysaterkeust? It helped me start the process of unraveling those issues. If you’re working on that, get that book, Kindle, or Audible. Like for real. #faithforfitness #wisfomforweightloss #transformfromtheinsideout

Update 2016: It’s been a little less than a year since we featured Queing‘s story. With another 15 lbs gone over the course of the year, she’s lost a total of 100 pounds. Major milestone! 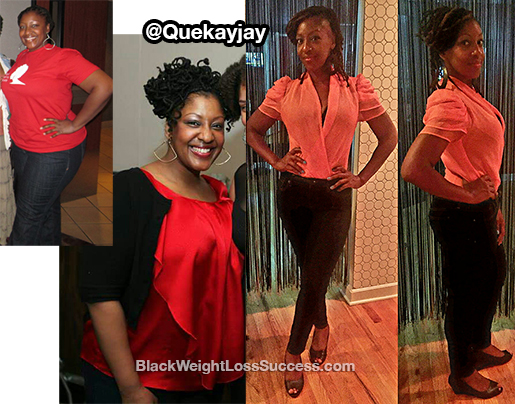 “I wanted to let you know that I have reached my 100 pounds lost milestone! When Blackweightlosssuccess.com featured me last fall, I had lost 85 pounds. Through consistency with clean eating  (primarily Paleo) and weight training, and of course mixing that all up with faith, I finally dropped those last 15 pounds. It’s taken a little over 2 years to lose the weight, but I’m so grateful for the long route because of the character and the wisdom it builds. You were the first to feature me. So, I wanted to tell you first :-D. Although I’ve had other major features since BWLW, it’s yours that meant the most because your site has helped me from day one. I appreciate you!” – @Quekayjay