You are here: Home / Before and After Photos / Tiffany lost 75 pounds

Tiffany lost 75 pounds.  Like any other moms, she still had a lot of baby weight to lose years after giving birth to her son.  She has decided to take charge of her health and fitness and lose the pounds.  Read her story: 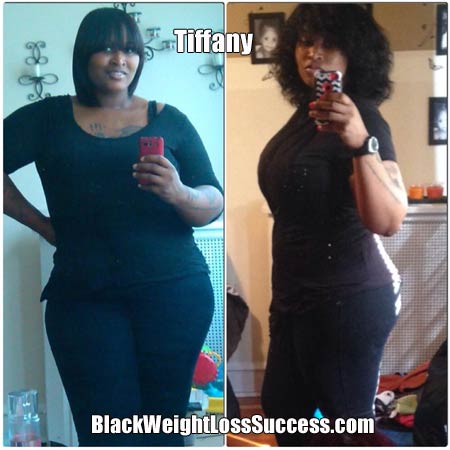 “I love this page ! It’s so inspiring to see women taking control of their health and fitness. The picture on the left is of me December 2013- two years after giving birth to my son. Going in to deliver him, I was 296 lbs! Two years later, I had only gotten down to 267 pounds (the pic on the left) and that weight loss was because I breastfed the first 9 months. I began actively taking charge of my weight on January 1, 2014 and I weighed in at 252 pounds. I am now 221 lbs, down a total of 75 pounds since November 2011, and a total of 31 pounds since starting my weight loss journey on January 1, 2014! My plan is to get down to 200 solid and fit pounds by June 2014 and this group of women motivate me to make it happen.

I changed my eating habits by taking in 1200 calories a day, eating 5-6 CLEAN meals a day, and limiting my carb intake. I drink a little over one gallon of water a day and I ONLY drink water ! When I started my journey on January 1, 2014, I only worked out from home using a cardio trampoline, 5 lb dumbbells, a Walking For Weight Loss DVD, and body challenges that I would see posted on the internet and Facebook. I joined the gym March 17, 2014 and now I incorporate the treadmill and stationary bike for interval training and floor machines for abs, arms and legs. Whether at home or the gym, I workout for a minimum of 40 minutes each session, 5-7 days a week, and I NEVER miss a Monday.”