You are here: Home / Before and After Photos / Montia lost 46 pounds

Montia lost 46 pounds. Love and marriage brought weight gain. Then pregnancy weight gain followed. She also had to deal with high blood pressure and postpartum depression. Despite these challenges, she connected to a long standing love of fitness and figured out what worked for her. Green smoothies and training for a triathlon were major factors in her success. 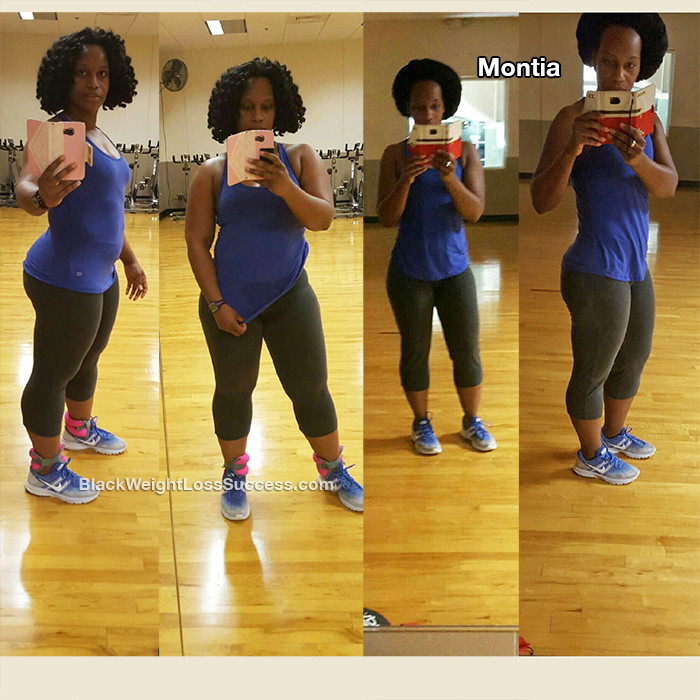 My biggest motivation was the scale alone. I fell in love and gained a lot of weight right before I got married and continued gaining after I got married. However, love and marriage did not motivate me to get to the gym. In addition to this, I had always struggled with my blood pressure so working out was a “must”
in my life.

I managed to lose the “love” weight, but once I got pregnant and had my daughter, I was back at my heavy “love” weight and plus some more. My blood pressure went out of control and postpartum depression had settled into my life. Even though I began working out again, the number on the scale was not moving. Nothing seemed to move the pounds and my postpartum was still in full bloom, even a year after having my daughter. I knew that baby weight would be different from regular weight, but I had no idea how different.

I began working out -actually training my co-workers every Saturday. My colleagues were having a lot of success with *my* workouts, but I was drowning in stress from my job and other personal issues with family. Along with suffering from depression, I continued to struggle to get my weight down. I became a certified Zumba Instructor but was so embarrassed by my weight  that I never taught it. I practiced my routines, but because of my body I didn’t have the courage to teach others until I got myself together first.

After weeks of migraines and repeated visits to the doctor, I was threatened with hospitalization for my blood pressure. I made it to see my 32nd birthday in January 2016. Standing at only 5’3”, I saw 200 pounds on the scale. Right then, I made my mind up to figure out something different to do with my eating and my workouts so that I could see success.

In February, I committed to a new beginning. Before I got pregnant, I was the smallest I had been in my life since high school at 168 pounds. All I wanted to do was be at 168 lbs. again by the Summer. So, for about a month, I watched my food. That helped, but it was extremely slow progress. I remembered my old supervisor said she trained for a triathlon and lost a lot of by weight training. I have always felt athletic, but my feelings about my weight and body have kept me afraid of doing many things I’ve wanted to do or try. I was fed up feeling that way.

I found out the YMCA has a large women’s triathlon every year and I was determined to “try”! The training was going to begin in April and I wanted to prepare for the training to keep from being embarrassed-even though I was already somewhat fit. I continued to watch my food and train a little harder… But the pounds were still barely moving.

I remembered being successful before for a short moment doing JJ Smith’s 10-Day Green Smoothie Cleanse. I found this book again and it changed my life. I gave it another try and in 10 days I lost 9 ½ lbs. I waited a couple weeks, and I tried the cleanse again and lost 9 more pounds. In about a month,  I had lost almost 20 pounds. Then, I wondered, “Does this work because it’s meatless or because of the bread and sugar cutback?” So, I gave up meat, bread, and cut out sweets.

As the weather got warmer, I started running more. I made the goal of being able to run 3 miles in under 45 minutes. Then running became goals. I made the goal of running 3 miles in under 35 minutes. I signed up to run all types of 5Ks. The goal now is to run a 5K in under 30 minutes. Along with running 3 times a week and training for a triathlon 3 times a week, I had met my 168 pound goal by June. I was going on a cruise in August, and I found that I had written in my journal that I wanted to weigh 160 pounds. So, my new goal became reaching 160 lbs. by August. By the time I went on my cruise in August, I weighed 159 lbs.

Since August, the struggle has been to lose my last 10 lbs., going from 155 lbs. to 145lbs. However, I’m ok with my success. I have surpassed my goal for the year. I started this journey at the end of January (2016) weighing about 200 pounds, and as of December 2016 I weigh 154 pounds. My goal for this moment is to continue to find peace with my body and learn what self-love really is.

Advice: My biggest advice would be to trust the process. No matter what the success is, big or small, be grateful for the progress!