You are here: Home / Before and After Photos / Yashica lost over 40 pounds

Transformation of the Day: Yashica has lost 43.2 pounds. She is a mom of 4 and is retired from the Armed Forces, so she knows what hard work is. She treated her journey like a part time job and went the extra mile to lose the pounds. Now, she’s sharing some insights with us. 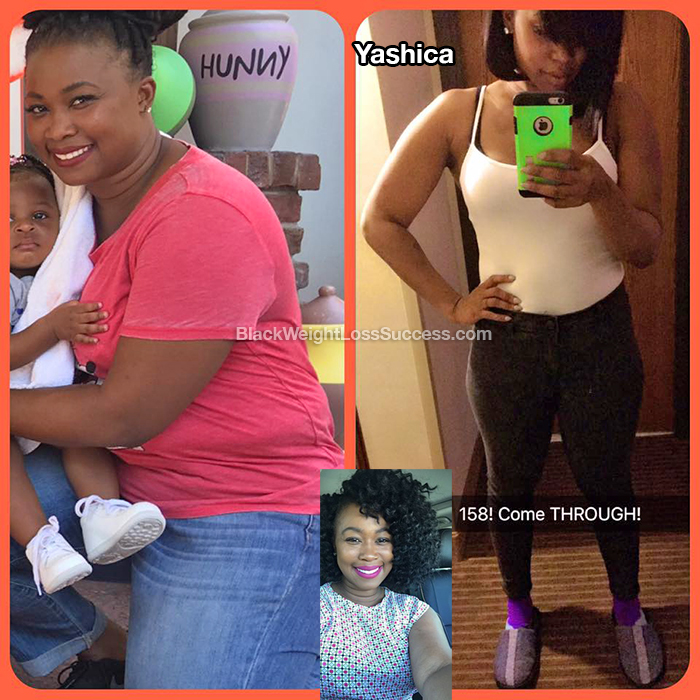 My name is Yashica Washington and I recently loss 43.2 pounds in 90 days! I started this weight loss journey August 22, 2016. The 3rd of my 4 children had just left for college and I wanted to start working on myself, completely. I had kids early and the drive that was required to raise them in a better environment had taken every piece of me. My days were so consumed with  taking care of my family that I was a footnote in my own life, and I decided to take it back.

I am currently retired from the Armed Forces and had my own issues medically to deal with; however, they never took priority. I use and watch SnapChat often. One of my favorite people to watch was, Dr. Miami. If you don’t know him, he is a pretty awesome plastic surgeon in Miami that snaps his procedures while performing them. He does great work and watching him inspired m to finally buckle down and save for the breast augmentation that I’d been thinking about for years. I even thought to myself, why not throw caution in the wind and save for that tummy tuck too? Hell, I deserved it! However, after researching the procedure, I noticed something. Repeat surgeries. Many of the women were having these types of surgeries multiple times and not changing their lifestyles or diets. I didn’t want to be in that crowd.

So, I decided to lose weight and guide myself into better eating habits. As, I stated before, most of my kids were out of the house and now, so I could afford the healthier items at the store. I realized a while ago that purchasing processed foods COSTS $$! Eating leaner cuts of meat, COSTS $$ too! Before, I could not afford it with a household of turbo mouths to feed. However, now there was no excuse.

I started purchasing healthier products and making small changes, like drinking 2% milk/almond milk, eating leaner beef and buying more turkey and chicken. I changed my cooking oils, cut the saturated fats, and most of all – I cut down the sodas by 90%! Yes, I still drank soda occasionally, because wanted to be realistic about these newer habits. This was not just a diet for me, it was a life change. When I ate dinner, I normally ate it with vegetables, rice, and cornbread. I’m a true southern girl at heart, but it was killing me slowly. So, I cut my portions in half. If I had one, I didn’t eat the other and I grasped the concept of what a TRUE serving size is. Guessing about portions is probably what got me to my previous weight anyways. I truly understood that even the bad things were okay every now and then, with the correct portions! Another HUGE KEY FACTOR was counting calories. I did 1500 calories to start and then dwindled it down to 1200 calories while in weight loss mode. If I was still hungry later, I would eat more vegetables, which have the less calories.

On August 22 – I started working out regularly! That day, I jumped on the scale and the read out glowed the number: 201.2 pounds! It was definitely the biggest I had ever been and getting down to 150 pounds truly didn’t seem obtainable in the time frame I wanted. You see, at the time I was still focused on cosmetic surgery which is cheaper in the winter months. The New Year brings on new specials to get clientele in the door and I wanted to be there with bells on.

At first, I worked on cardio for about 30 minutes, then moved over to toning and stengthing exercising. Cardio is a money maker when trying to lose weight and I understood that completely, so I slow ramped up my cardio to about a hour and 45 minutes a day, divided into 2 sessions, 5 days a week. This helped me reach my goal quickly! Now, it was not my intention to do so much cardio per day and a lot of people thought that I was nuts, but it worked like a charm. I started my day out with an hour and 15 mins of cardio (a hour on the ARC trainer – my favorite, followed 15 mins on the stair climber after doing toning workouts).

My husband became inspired and wanted to join me at the gym afterwork. We share a membership, so I had to be there for him to get in (bummer right). So, I used that time wisely by getting back on the arc trainer for about 30 mins and working out the other muscles that I hadn’t gotten to that morning.

Essentially, I treated my workout routine like a part-time job. And in any job – we have co-workers, which is where the Black Women Losing Weight group came in. I needed some encouragement from those that had struggled or are struggling with weight. They were there when I needed advice or just a shoulder to lean on when I consumed that Big Mac on cheat days. I plateaued A LOT, so I needed advice or encouragement to push through it. The group because special to me and I only posted to that group to show progress. No one else knew that I was losing weight but the people in my life who saw me often. I wanted it to be personal, plus I wasn’t losing weight and gaining healthier habits for anyone else. I was doing it for me and didn’t want to “go off” about an insensitive comment.

The group members love using their FitBits and counting steps, so I purchased one. I realized after using it, that I was not staying active after I completed the workouts. Yes, the workouts helped tremendously. However, staying active and ensuring that my metabolism was working non-stop, helped more with losing weight and increase my burned calories by about 20 to 30% daily.

The way I lost weight may not be the way for many people. I had a lot of time daily to commit to such regiment, so it is why I believe that it worked so quickly. With consistency and determination, I believe that we will ALL meet our goals and find out what works for us!

Thanks for allowing me to share and YES, I will still be having cosmetic surgery… Just after I tone up now. LOL