You are here: Home / Before and After Photos / Tamika lost 40 pounds

Update: Tamika has lost 30 more pounds by going vegan for a total of 70 pounds gone.

I was featured in 2015 and I just wanted to give an update. I started my journey in June 2014. I was successfully losing weight until I started the process of becoming a first time home buyer. The stress of that experience caused me to eat foods that I normally wouldn’t eat and I also stopped doing my gym routine. In October 2015, I bought my home and I was featured for my 40 pound weight loss at the end of 2015.

In February of 2016, I restarted my goals. By the end of March, I decided to try a new approach: the vegan lifestyle. Today I can proudly say that I have been going strong for two whole months, dropping nearly 30 pounds. I am almost at onederland, that magical place many of us dream of. That’s a place I haven’t been in since high school (nearly 20 years ago)! These pictures are from the start of my journey in June of 2014 and the last day of May 2016. Instagram: @mikachu79 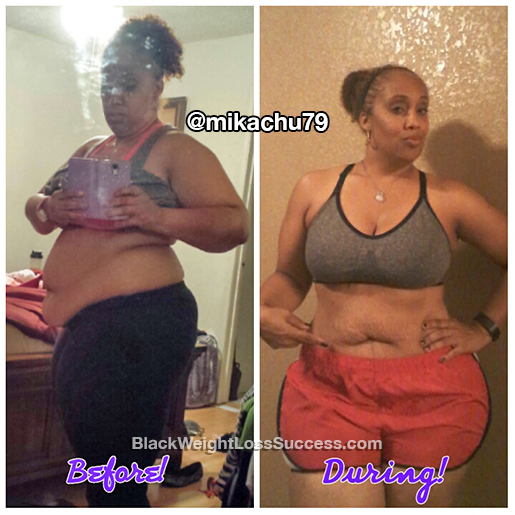 Dec 2015 – Weight Loss Story: Tamika lost 40 pounds. This proud single mom of 2 wanted to get healthy for herself and for her children. Clean eating, cardio, weight training and determination has paid off for her through ups and downs on her journey, including the passing of her beloved grandmother. Here is what she shared with us… 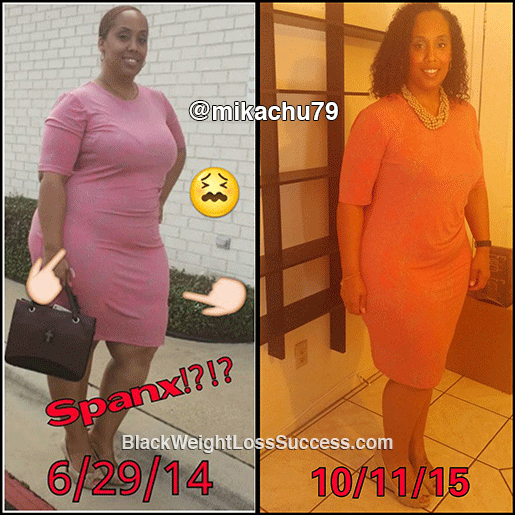 I want to share my story with you all not only because I want to show that this disease of obesity can be overcome, but you can do it despite the many obstacles and roadblocks that might be in your path.

Last June, when I stepped on the scale weighing in at 260 pounds, I knew that I had to make a change in my life. I started off with the help of a friend who got me on a clean eating plan. It included lots of healthy food; baked chicken, fish, ground turkey, green veggies, brown rice, fruit and lots of water. I started going to the gym five days a week for an hour at a time, doing cardio and weight training. In the first eight weeks, I lost 40 pounds. Yay! Around that time I also stopped weighing myself, as the scale became an obsession for me.

As the winter came, so did my desire to eat…and so I ate and slacked off at the gym. Thus, the weight slowly crept back on. After the death of my Grandmother in March of this year, I took some time off altogether as I lost complete focus. I knew she wouldn’t want me to give up on my goals, so I picked myself back up and got back to work.

School started, so I was running one child to band practice and one to football games. However, I have still found time to work on myself. As of October, I weighed in at 220 lbs. My ultimate goal weight would be 165-170 lbs, but in the end I just want to be healthy!