You are here: Home / Before and After Photos / Akilah lost 118 pounds

Transformation of the Day: Akilah lost 118 pounds in a year.  Borderline diabetic and knowing that she didn’t want to reach 400 pounds, she sought out the help of a doctor to change her eating habits. She also learned how to workout in a way that worked for her. As she reflects on a year of hard work and success, she shared with us about how she did it… 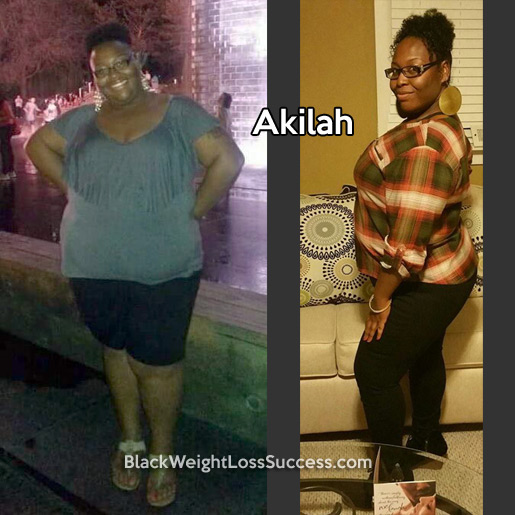 Hi, my name is Akilah. I have currently lost a total of 118 pounds since Sept, 29 2014. I was always overweight through out my childhood and into adulthood. For the most part, I was happy the majority of the time. I never really experienced hate nor was I bullied because of my weight. I have always had a loving support system that loved me for me. Because of this, I never looked at my weight as being a big deal.

I have tried plenty of diets and slim fast shakes through out my life but never stuck to a program or plan. Then, last year in July, I weighed myself and the scale said 354 pounds (height: 5’5″). I was devastated because I didn’t want to be over 350 pounds. To me that just opened the door to approach 400 pounds and that was a place where I had once been.

I searched for a weight management physician and went for an appointment on Sept. 26, 2014. She was very helpful in coaching me on how to watch my caloric intake, eat different foods to help make myself feel full. She also suggested that I get to the root of my eating issues. I then figured out that the main factor was the stressors of life. It wasn’t necessarily all about bad stress, because I ate during good moments in my life as well. I love to cook and bake so I ate a lot of what I made. It didn’t help that I had a boyfriend at the time who was an excellent cook, so we ate all the time.

Then on September 29, 2014, I seriously began my journey. I walked in the parking lot next to my house everyday. I slowly started adding good foods and taking a way bad foods. I gave up soda and drank only water for the first 2 months. I dropped 40 pounds. I continued to research ways to keep off the weight so that it could become a lifestyle. I ate more vegetables and fruit and eventually gave up beef and pork. I also stared to eat chicken less, cut out fried foods, lessened my trips to restaurants and began to cook more at home. I became addicted to cashews and other nuts such as almonds to help me through out my day.

As time went on I started to use YouTube exercise videos such as Tiffany Rothe, Leslie Sansone walk videos and various others. I also did freestyle exercises that I found on Pinterest and worked out with a friend who is physically fit. Eventually, around  May of 2015, I joined a gym and this helped to boost my weight loss and made it fun.

At my check up in July of 2015, I had officially lost 100 pounds. I was so excited because I had never worked so hard for something in my life. I was afraid of becoming diabetic, which I was at the borderline for, and my knees were getting to the point of it being uncomfortable to walk. I appreciate the little things now like crossing my legs, being able to see my feet when I look down and increased flexibility in my joints.

I encourage everyone who has had a down hill battle with obesity to just keep at it and more importantly get your mind into it. If your mind is not in it, mostly likely you will not accomplish your goals. My current goal is to get to 200 pounds, then 180 pounds and just maintain from there.

BWLW, Thank you so much for the stories and the inspiration that you all have provided for me as well as other women struggling everyday. Obesity can be beat one step at a time. Thank you!