You are here: Home / Before and After Photos / Bianca transformed from a size 14 to a size 6

Bianca transformed a size 14 to a size 6. The weight gain came after she moved to China and was faced with depression and low energy. She was inspired by the vegan diet of one of the ladies we featured. After doing her research, she changed her habits and stopped focusing on numbers on the scale. Check out her story. 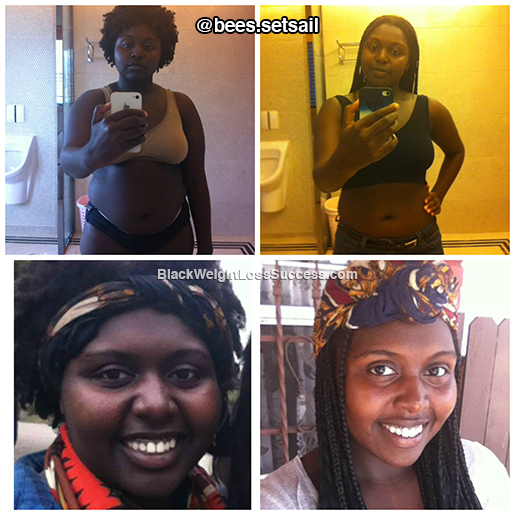 I’ve always struggled with weight, but after moving to China almost a year ago it all went downhill. Two months in, I gained an immense amount of weight due to the changes of being in a new country. Chinese food has a tendency to be oily and usually fried. Also, I didn’t chose the healthiest options which brought me into a deep depression.

I didn’t take the weight into consideration until my clothes stopped fitting, I had low energy and my face broke out. I almost couldn’t even recognize myself. I wanted to do something I just didn’t know where to start. I was already a fan of BWLW‘s facebook page and dreamed of losing weight like the strong women I saw featured there. I never thought I could reach that goal, because exercising isn’t my forte. I also wasn’t ready to give up the foods I was use to eating. However, one day while cruising on BWLW, I saw one story of a woman who lost weight through a vegan diet. I researched more about this, and after some time I felt it was something I could try.

I changed my eating habits by eliminating all toxic foods, which was super tough. I followed a basic food plan with a combination of raw fruits and veggies, beans/lentils, and grains, such as oats. For example: For breakfast, I either have a fruit, a green smoothie or oatmeal w/ fruit. Lunch is a BIG dressed salad with some oat balls or applesauce on the side. Dinner is either vegetable soup, another BIG salad or quinoa with veggies or tofu and beans. Throughout the entire day, I drink lots of water and drink lemon water every morning. I kept it simple, as a way to detox my body. After a month or so I was in a good place and began to experiment more with vegan foods. Also, I was always on YouTube looking for new recipes.

I didn’t start working out until after a month and a half of changing my diet. I was busy, but I knew that exercising was important and I had to fit it into my schedule somehow. Luckily, I went to a fashion show and one of the male models was promoting a workout business. I approached him and we agreed to work together. We came up with a plan that worked well for me. It included lots of cardio and strength training. I exercised 3 times a week (occasionally 4 times) for 45 minutes (sometimes an hour depending on my schedule). I was already losing weight through the vegan diet, but exercising increased my weight loss.

I’m 5’1″. That’s too short to be the weight I was. I’m not sure what my starting weight was or even my current weight. The entire time, since I started my weight loss journey, I never once looked at the scale. I didn’t have one to begin with, which was actually good. I didn’t determine my progress by numbers, instead I took pics. I do know that I’ve gone from a size 14 and to a size 6. I started in April 2016 and I saw a huge change by July. So, months later, I’m still transforming. Being on a vegan diet helped me more than just losing weight. I gained a boost of energy, a faster metabolism, my face cleared of acne, etc. There are so many benefits.

My advice to others who want to lose weight is to take time and reflect on yourself. Know your purpose and why you want to lose weight. Find out what works best for you. Expand your options, because it’s never easy to transform your body. Also, mentally prepare yourself because this experience challenges your mind. Be patient, because it takes time. Persevere, because you will fall. Trust the process, accept every stage you’re in and don’t think temporary. Make health a part of your lifestyle.