You are here: Home / Before and After Photos / Utica lost over 136 pounds

Success Story of the Day: Utica lost over 136 pounds and has gone from a size 26 to a size 16 in pants, and a size 4x to a large in shirts. She has struggled with her weight since childhood and faced the ups and downs of weight loss through the freshman 15 and multiple pregnancies.  Wanting to be positive example for her children, this proud mom focused on eating healthier foods and working out.  Check out what she shared with us about her journey… 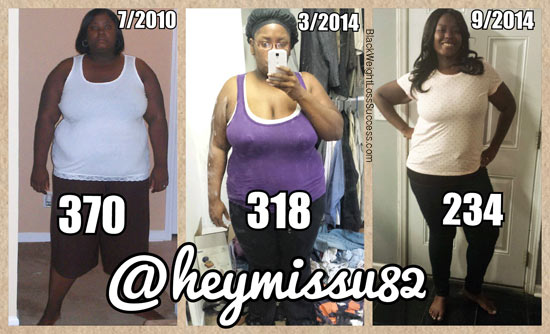 My name is Utica, and obesity is something that I have struggled with for as long as I can remember. There was never a time in my life that I can recall that I wasn’t aware that I was overweight, bigger than other kids that were my age. I was drinking Slim Fast at 9 and being told that my blood pressure was elevated at 10. I’ve never had a break from it. During middle and high school, I slowly crept up from a size 10 to a size 24 due to a lot of emotional eating and just not taking care of myself. When you’re young you don’t really think about those kind of things and how they can affect you. When I was 18 and left home for school, I ended up meeting the guy that would later become my husband. I not only put on the Freshman 15, but that additional weight that comes on when you’re in love and comfortable. I was around 285 at that point. Over the next few years between yoyo dieting, using every diet pill I saw a commercial for and starving myself for days at a time just to end up binging on anything I could get my hands on, I was 340 pounds by the time I got married in 2006.

The year after that I began having extremely long menstrual cycles where I would be on for weeks at a time, and I knew that my weight wasn’t helping. I read that eliminating meat products might help balance my hormones, so I did that and lost about 45 pounds. However, I ended up getting comfortable again and gained everything back plus more. By 2010, I was 370 pounds and taking steps to get approved for gastric bypass…when I found out I was pregnant. So, I put those plans on hold, only to lose the pregnancy about 2 months later. During that time I reached my highest weight of 389 pounds. About 2 months after that, I lost my job. There I was with no insurance and still morbidly obese. That was when I knew that I really had to lean on God and know that everything would turn around if I just kept going.

I started the process of losing weight again, and found out that I was pregnant. I ended up having a beautiful baby boy in February 2012. I was around 357 pounds when I delivered my son. The next year was consumed with being a new mom and not really taking care of me, so in 2013 I said to myself that I would put more effort into my eating and exercise. I lost about 30 pounds..and got pregnant again! I gave birth to my gorgeous daughter in February 2014, and when I looked at her while I was still in the hospital, I knew that I had to really make a change.  I knew that I would be the example she’d follow in terms of health and body image. I was an overweight little girl and I didn’t want her to fall into the same cycle. I was around 357 lbs when I delivered, and when I went back for a 1 week check up for my blood pressure, I had lost 25 pounds. I knew that it was fluid loss, but seeing that number at the time-322, was enough incentive for me to get going when I got the all clear to exercise.

6 weeks postpartum I was 318 pounds, and I began tracking my food on My Fitness Pal and documenting my fitness journey on Instagram (@heymissu82) on the same day- March 25, 2014. Here we are, 6 months later and I’m down 123 pounds from when my daughter was born and 155 pounds down from my highest weight. I’ve gone from a snug size 26 to a size 16 in pants, and a 4x to a Large in shirts. I started off slowly, using Walk Away the Pounds DVDs or putting the kids in the double stroller and walking them around the neighborhood. I then began doing T25, and went through an entire cycle. After that, I focused more on pushing myself past my comfort zone and started weight training and running with my sister twice a week. When I started, I could only run for 2 minutes at a time-and that was good for me because I was never a runner. But now, I can run for 2 miles nonstop, I’m building muscle and truly finding out what my body is capable of. I try to do some kind of exercise for at least 30 minutes a day, 5 days a week.

In terms of eating, because I have two small kids I don’t have a lot of time to prepare meals. I stick with things that are quick but still as healthy as possible. Lean protein like fish, egg whites and poultry have been my best friends, along with green veggies. When I started, I would eat starches like rice, pasta, bread and potatoes but as I tuned more into my body I realized that I didn’t like how my body reacted after I ate them, so I have gradually phased them out. I eat every 2.5 to 3 hours and try to drink at least a gallon of water each day. I just love the fact that I don’t feel like my body is a prison anymore. For the first time in my adult life I really feel like I’m free and discovering the me that I was always meant to be.