You are here: Home / Before and After Photos / Francheska lost 84 pounds

Transformation of the Day: Francheska lost 84 pounds. She struggled with her weight all of her life, even enduring the nickname “Fat-Cheska” as a child. After a painful breakup, a health crisis and the death of her father, she was depressed and in need of a serious lifestyle transformation. Check out her story. 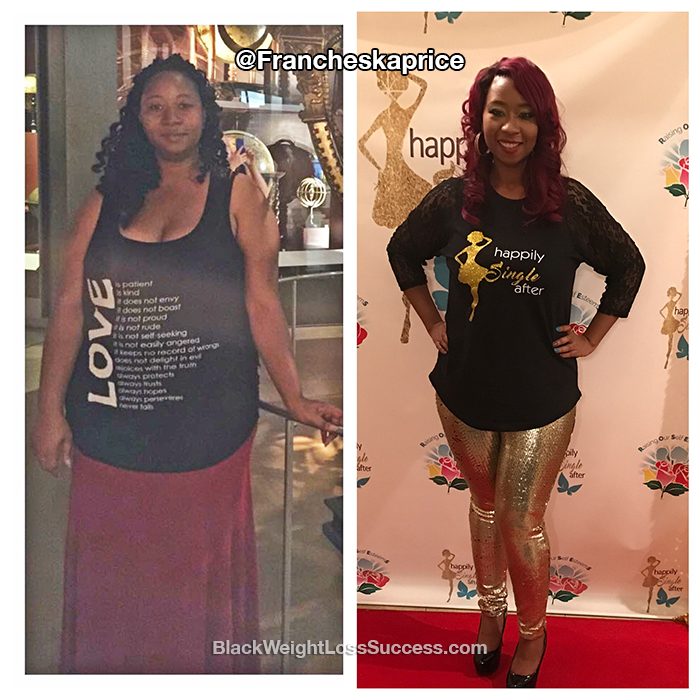 What was your motivation?
Weight had been a struggle for me ALL of my life. I was the fat kid who was never chosen. The kids in fourth grade made up the nickname “Fat-Cheska” as a spinoff of my name, Francheska. In 2004, I lost 80 pounds on Weight Watchers, but 10 years later I had gained back 100 pounds.

Food was a crutch for me and my go to. I’m from Louisiana (although, I currently live in Texas), so food was more than just something to eat. It is something to be celebrated. In January 2015, I went through a horrible breakup. I was engaged to be married. One day, I was texting my fiancé about our wedding plans and later that night I was awakened by a text from his phone. The text contained a photo of him lying naked in another woman’s bed. She took his phone while he was asleep, snapped a photo of him and sent it directly to me with a message. Instantly, the life I thought I knew had changed. I had to endure the pain of canceling a wedding and facing my new normal.

A few weeks after this happened, I was diagnosed with HPV- CIN 3… which was one membrane from being cancerous. I had to go through 5 procedures in 2015 to correct this.  Then, in April 2015, my father suddenly died. Those few months changed the core of who I was. I was overweight, depressed and needed to do something with my life. I got to the point that I would have rather died than to stay in the body I had. It took me about a year to realize that.

On March 14th, 2016 I went to Mexico and had a gastric sleeve operation that not only saved my life but changed my life for the better. The cost was cheaper than in the US. I had a wonderful surgeon who was skillful and his bedside manner was impeccable. I have had zero complications and it was a risk that I would take all over again. My motivation was that I wanted to look and feel better. In order to get something different, I had to do something different and I have zero regrets!

How did you change your eating habits?
The gastric sleeve operation dramatically reduces the amount of food one can consume. I can now only consume about 4 ounces of food at a time. I had to cut out sweets and simple carbs. I have to maintain these lifestyle changes for the rest of my life, because although I have a tool in my gastric sleeve, I still have to watch what I eat or the weight will come back.

I embraced a high protein diet that consists of a 30 gram protein shake for breakfast and a protein/veggie for lunch/dinner. I snack on cashews or fruit and I only drink water, except maybe 2 times per month. I initially ate low carb meals, but my doctor told me that my body needed more carbs. When I increased my carbs, the weight began fall off. I ate higher carb veggies as well as more complex carbs (beans, grains, etc).

What did your workout routines look like?
I love Pilates and Zumba. My workouts consisted of cardio, but since I’m almost at goal I’ve cut back on cardio. Now, I’m getting into lifting weights to gain muscle.

Starting weight/Current weight
My starting weight was 263 pounds. I currently weigh 179 pounds. I have about 4 lbs left until I hit my personal goal of 175 pounds. I am 5’8″ tall. It has been a year now, since my surgery. I haven’t lost weight as fast as others who have had surgery and I’m perfectly ok with that. It’s my journey.

What advice do you have for others who want to lose weight?
Do it! You can sit around and say “One day, I’ll do it”. Instead of saying “One day” make today day one! It’s not easy. You will fall at times, but dust yourself off and start over again. I took my life back after a painful breakup, a health crisis and the death of my father because I wanted something different. Now, I’ve written a book called Happily Single After where I candidly share my story of pain, setbacks, weight loss and triumph. I want to help other singles know that there is an “after” to whatever your story is. Use your weight loss journey as a story to help others. You can do this! 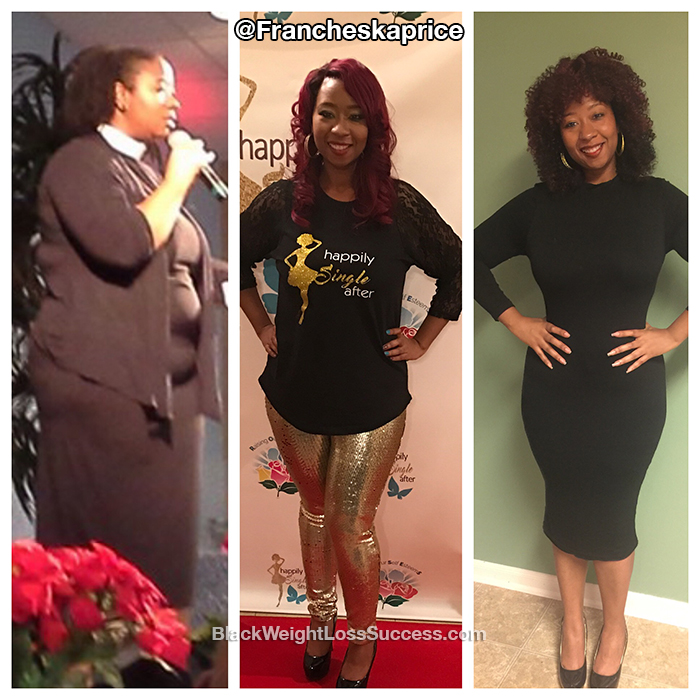 Last Sunday I faced a huge fear of mine.. SHORTS!! Lol. This was so scary for me. Kiyo Hashimoto talked me out of wearing leggings and I’m appreciative. 😂 I felt very confident even with saggy skin from my surgery. It’s mine and I OWN IT! The pic on the left is from a year ago after I’d lost 40lbs. Sometimes the girl on the right still feels like the girl on the left. But I’m different and grateful.