You are here: Home / Before and After Photos / Jessica lost 122 pounds

Transformation of the Day: Jessica lost 122 pounds.  This dedicated mom of 3 (with one more on the way) faced not only obesity and heart disease, but she also had to support her family when her husband fell ill. She also became pregnant during her 3+ year transformation. You’ve got to check out her story and her video (below). This woman was determined and focused. Now, she is a personal trainer and Zumba instructor, helping others to change their lives. 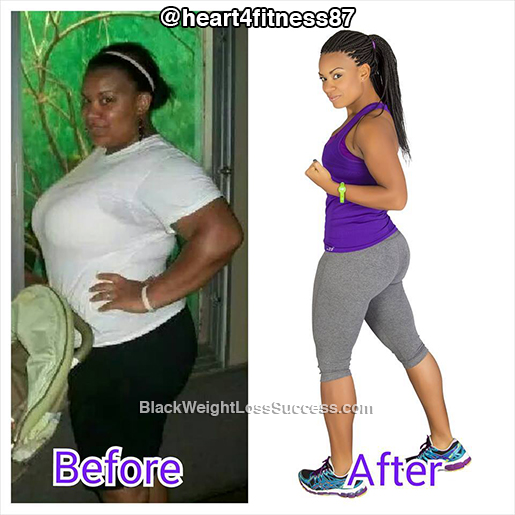 It was May of 2012 when I found myself looking back at pictures that I took during Easter that had just past. I remember looking at pictures that I took with my mother, children, and friends. I was extremely larger than everyone. I had never seen myself that large. That is when I decided to make a change to be healthier and lose the unwanted weight. I weighed in at 272 pounds. This was the largest that I had ever been. On top of being obese, I have a heart disease, called Wolff-Parkinson-White (WPW) syndrome, that was constantly giving me issues, and had me taking unwanted trips to the emergency room here and there. I remember telling my husband that I was ready to get the weight off of me, and this time I was going to be committed to it. I had tried to lose weight many times before I had kids and I would never lose more than 30 pounds. The moment that I lost the 30 pounds, I was impregnated with my first child.

In the beginning, I just started by walking 3 or 4 days out the week and not eating after 7 o’clock. I also stopped drinking sodas and took a detox pill by the name of “The Cleaners”. I lost 8 pounds om my first 2 weeks. I remember being on cloud 9, because I was finally seeing the scale move in a favorable direction. I really began to drop weight when I was introduced to Visalus products. I begin supplementing 1 or 2 meals with a protein shake, and had lost enough weight to do a run walk instead of just walking. Weeks later, I was able to run about 2 miles straight without stopping, and my endurance was probably the best I’ve ever seen it, since my junior year in high school. One of my friends invited me to a Zumba class. It was my first time doing Zumba and I loved it! I didn’t have as much endurance as I thought I did, being that I had to stop a few times and my breathing was extremely heavy. After that, I begin attending a Zumba class on regular basis, but that consistency ended soon.

On July 17, 2012 my husband became really ill. What started only as a head ache became multiple trips to the hospital. I went from working a part time job to working 2 jobs. My husband spent most of 5 months in the hospital and couldn’t work. We had 2 toddlers, a house, and a whole lot of bills that had to get taken care of. I spent many days going from work, to the hospital, to home, and to the gym. I would be in the gym on the treadmill or elliptical at 2 o’clock in the morning just so that I wouldn’t miss out on time with my kids or time with my husband in the hospital. Working out became more than a mission. It became my outlet and my personal quality time. I lacked much sleep, but still losing the weight was satisfying enough for me at that time.

My life and weight loss journey took a major turn when December came. On December 2nd, I weighed 224 pounds. I had lost almost 50 pounds. I was looking and feeling different by that time. I never imagined that I would feel so good and be as thin as I was. My husband took sick in July of that year and in November, Thank God, he was finally getting better and gaining his health. Well along with that, I began to see that my weight had plateaued, and losing weight at the time wasn’t so easy. I wish I could have blamed it on the holidays, but I made sure to stick to my regimen and healthy eating habits even during that time. The minute I would plateau, I would adjust to a stricter eating regime, eventually leading to clean eating with no processed foods. I started eating a lot of vegetables, no white carbs and only lean meats.

I was still working out as much, even intensifying my workouts to meet my goals for the year. Then, on January 2nd of 2013, I found out that I was expecting my 3rd child. This was not the exact good news that I was looking for. I was actually in denial for a while, but the doctor confirmed my pregnancy, and rid me of doubt. I was devastated, because I thought my incredible weight loss journey had come to an end.

Here I was with 2 kids and 1 on the way. I knew I couldn’t work out as much or as intensely, but I was determined not to gain all my weight back. I quit one of my jobs and was able to spend more time with my family as my husband was able to work again and bridge the financial gap. I didn’t eat as healthy, but morning sickness was in my favor when it came to not gaining too much weight. Through the whole pregnancy, I was determined to continue my weight loss journey, and once I had my baby it was on! I had my baby at the end of August in 2013, and 4 weeks after that I was back to walking. I remember doing my 6 week check. My doctor said, “You’re losing that baby weight pretty fast.” “What are you doing?” I told him I had been walking, then he asked who told you that you can do that. My answer was my body, and he told me that was a pretty good answer. Once I received my clearance from him, I was ready to turn up!

My walking turned in to running 3.5 miles, 5 days a week. I also began taking Zumba classes at my local gym, and with that I realized that I was able to burn more calories in one hour of dancing and having fun than running the same route to get a good source of cardio. I stopped my 2am workouts and was exercising during more normal hours. My sleep pattern headed to a more effective pattern. The weight at that time began to evacuate my body. I was also nursing my baby at the time, and I believe that contributed to my stomach shrinking also.

Around the beginning of 2014, I found myself at a total loss of 72 pounds. My Zumba instructors I would take would always encourage me to become an instructor, because I was always so consistent and energetic. In April of 2014, I decided to get my Zumba Instructors License. At this time, I was doing 2 classes of Zumba 4 days a week, along with 5 days of weight training. While I gained muscle, the weight loss slowed but didn’t stop. The inches on the other hand were shedding. I began working for the same local gym where I had attended classes. My church, which has been beyond supportive through my whole journey, has allowed me to teach classes there also.

Everything that I have been through on my weight loss journey brings me to where I am now. I have lost a total of 122 pounds, getting down to 150 pounds. I was wearing a size 20/22 in women’s plus size, and now I am wearing a size 7/8 (height: 5’7″). While I still have heart disease, I do not have any symptoms and I am not on any medication. God has really done amazing things with this weight loss journey, but through it all He has showed me how to stay humble and understand that my testimony isn’t for me. My goal from this point on is to help people get to a healthy weight, and stay there through having fun and finding what workout and diet works best for them. I’m continuing to teach Zumba classes, as well as attending the classes that I went to before I became licensed. To further my knowledge and ability to fulfill my goals of helping others, I have become a certified personal trainer. I hope that God is able to use me to his highest capacity, and I pray that I continue to exercise humility through it all.

I am so grateful for my friends, family, and church family that has been so encouraging through this whole process. I give a special thanks to my husband that keeps the kids so I can fulfill my dreams and heart desires. More importantly, I thank God for giving me the strength and the mindset to follow through. There were many times that I would say my grace before I eat, and I would ask God to please not let the calories stick. I believe without a doubt that as silly as those prayers were, he answered them for me. This has been such a blessing.