You are here: Home / Before and After Photos / Stacey lost 46 pounds

Weight Loss Story of the Day: Stacey lost 46 pounds.  This proud Jamaican mom and author was inspired by the before and after success stories we post and decided it was time to lose the weight and pursue her dreams.  Here is what she shared about her weight release journey… 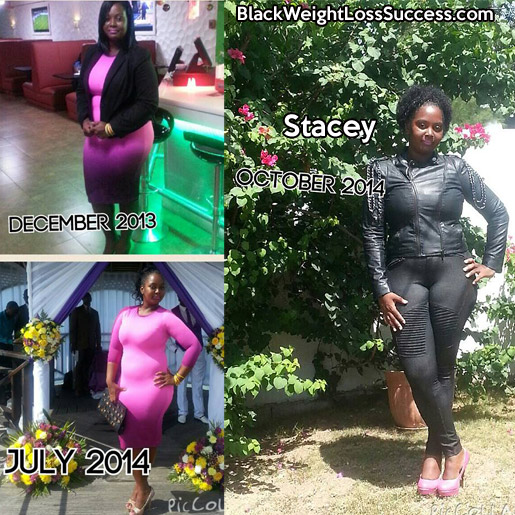 I was struggling with my body weight from before my teenage years; always thinking I was obese, even when I was not. When I really became obese, I did not know until it became extremely difficult to walk short distances without becoming breathless. In 2007 I started going to the gym, and like so many others I wanted to lose what I had gained slowly over the years in a jiffy.  That led me to abuse the use of weights in the gym against the trainers numerous warnings and resulted in damage to the muscles in my back. I became incapasitated for several weeks and was ordered by my doctor not to resume weight training.

In 2009, I began to gain weight rapidly again because I am an emotional eater. My bad eating habits along with lack of exercise contributed to this. Thus, I purchased a pair of two pounds ankle weights which I strapped to my ankles and walked to and from work with them on. As a matter of fact, I wore only pants so that even in my six inches heels (that I should not be wearing at all) I still had the weights strapped to my ankle. Well, by now you must figured that I damaged even more muscles because that was not the correct way to use weights again. I started having spasms in my legs and back. The pain was so excruciating and all the pain killers the doctor gave me could not lessen the pain I was feeling. Thank goodness for cucumber juice which I had on an empty stomach every morning, that helped me so I can now share my story with you.

In 2013, I discovered the site ‘Black Women Losing Weight’ and for a while (and when I say a while it was an entire year) I read the different success stories, liked various monthly challenges and kept saying I am going to try this next month. My next month never came until January 2014; when I decided I wanted to be healthy. I wanted to feel good about my body and I wanted my daughter to be proud of me rather than telling me all the time, “Mommy you are beautiful and you don’t look your age. Just imagine how great you would look if you just tried to lose the excess body weight.” I used those reasons along with the promise to myself that I will be one of the success stories on Black Women Losing Weight as motivation.  Next, I formed an alliance with a friend of mine to lose weight. Both of us had issues with our weight since high school and my friend was determined that our 35th birthdays should not find us having these issues.

When I started my weight loss journey in 2014 I was weighting 240lbs and I am 5″7″. My first exercise  routine and the only one I could do was going to the park and walking three days a week. When I started senior citizens were passing me, even when I was walking briskly and I became breathless easily.  However, through perseverance and increasing my workout time from three days a week to six days a week, after four months I was jogging behind the pros at the park. My new goal was to jog pass them one day.

I realized that weight loss is 75 percent what we eat and 25 percent exercise thanks to Black Women Losing Weight and its daily information about weight loss. So I changed my eating habits, which was not easy because I am use to trying to eat away my problems. I did a couple smoothies, lots of water and I developed a very healthy love affair. I ensure first thing every morning to drink water to  saturate my inner being and I kept my inner being saturated with water throughout the day. Eventually I lost my love for other drinks and had them no more. When I felt the urge to eat because of my past habits, I drank water or had a fruit. One of my major challenge is that fruits and vegetables are on the expensive side in Jamaica, but whatever fruits and vegetables were in abundance in the markets that is what I purchase and utilize as best as I can.

In October 2014, I went on a scale for the first time after I started my journey and I was shocked because in over ten years my bodyweight has never being under 200lbs. I was weighing 194 lbs. That’s a total of 46 pounds lost in ten months. I was so happy and in disbelief for a couple days and nights too. I kept going on the scale to ensure I was seeing correctly.

I am not where I want to be as yet, but I thank God I am not where I use to be. My ultimate goal is to be 150 pounds. Was it easy to lose the weight? No it came with many setbacks, but I came back stronger without making past mistakes and damaging my body. I told myself slow and easy is my theme along with the fact that quitting was never encoded in my DNA.

My weight loss has boosted my confidence on many levels and the greatest level is that for years I wanted to launch my writing career, but thought I was not photogenic enough to be on my books because of my bodyweight. Due to my weight loss, I started working on my fan page ‘Stacey Fowler Found One Of Her Purpose In Writing‘ on Facebook by posting daily motivational pieces and the warm reception of individuals to my pieces is priceless. Thank you Black Women Losing Weight! My success is because of you. I am Stacey Fowler saying God bless you and see you at the top of the ladder of success!