You are here: Home / Before and After Photos / Ladii lost 75 pounds

Weight Loss Story: Ladii lost 75 pounds. After a few wake up calls, this proud mom decided to get moving and lose the weight this year. Here is what she shared with us about her journey… 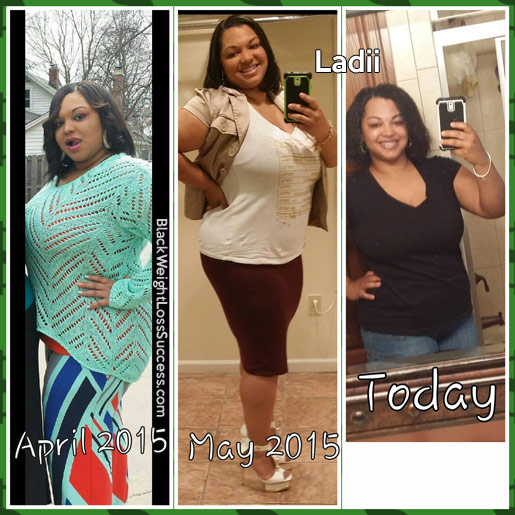 Ever since I got married at 16 years old and gained 100 lbs in 6 months, I’ve a hard time losing weight. My knees hurt, back hurt and I had no energy at all. After leaving him, I lost the weight, but 2 years later I ended up pregnant with my son. Of course, I gained weight with that pregnancy, but lost it all and more after having him.

In February 2015, I was seen by my doctor to be checked for diabetes and all that good stuff. I was one point away from having type 2 diabetes. They found many more things wrong as well and suggested weight loss. Even though I worked out a lot and I have healthy eating habits, I didn’t exercise past my “oh that burns” point. Once a move hurt, I stopped and I would never do more than just enough.

Well, one Sunday morning getting ready for church my son walks in on me changing my shirt (he’s 3 years old) and he runs up to my belly and says “Wow mommy, you gotta fat belly.” and starts to jiggle it. Speechless, I explained that he once lived in there and it wasn’t easy getting it to go away. He told me not to make his home go away. Lol, he loved my fat. Everyday after that he would play with my belly, jiggling it and blowing zerberts/raspberries on it.

At that point, I’d never looked in the mirror naked, so I finally did and made up in my mind that it was time to get the body I know is mine. I began running 1 to 2 miles a day, taking my son with me on his bike so he got some exercise as well. Then, while he played at the park after the run, I would workout using the toys there. I started off making changes at 278 pounds in February 2015. I began working out in April and have lost 75 pounds. My current weight is 203 pounds and I am 5’4″ tall. I have 40 pounds more to go but I won’t stop until I reach my goal! Thanks for listening to my story.