You are here: Home / Before and After Photos / Chavonne lost 65 pounds

Weight Loss Story: Chavonne lost 65 pounds.  She had a common wake up call that many of us may find familiar: stepping on the scale at a doctor’s office.  She decided to commit to lifestyle change that same day and her actions have paid off.  Here is what she shared with us… 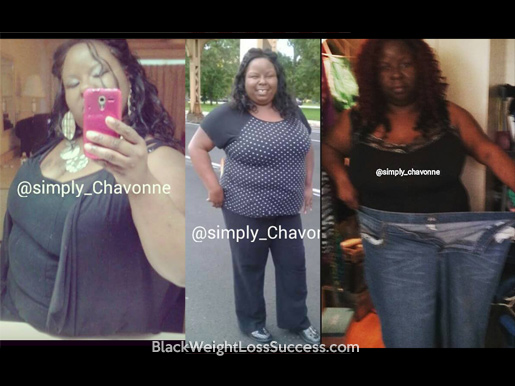 Hello my name is Chavonne and I lost a total of 65 pounds by changing my lifestyle.  My journey began eight months ago, after I finally decided it was time for a change! I decided that I was tired of looking in the mirror and seeing a woman who was depressed underneath her smile.  You see, over the years I had gained a lot of weight but reality hit me on how big I actually was after going to the doctor with my mate. While at the doctor was with her, I decided to jump on the scale and it read that I was over 300 pounds.  I knew that I’d gained a significant amount of weight but I couldn’t imagine that I was that big.  All I could think about in my mind was how did I let my weight get that out of control?

I was in shock and maybe even in denial, but the numbers on the scale didn’t lie. I was faced with the reality of the truth.  That day, I was so distraught with how much I actually weighed that I couldn’t focus on much, except the fact that I was indeed what the doctors called me for years: morbidly obese. I know, I know… the doctors have been using that term for years, but in my mind I thought they were just saying it because I wasn’t a hundred pounds soaking wet.  Of course, I weighed a little more than the average slim woman but to me it was okay because everyone doesn’t have to be pencil or stick thin to look and feel good.  Well, at least that’s what I thought until the magical number 311 lbs appeared before my eyes.  I know the purpose of my mate’s clinic visit was for her to hear about her tumor status. However, in a way I was selfish because my concentration at the time was on where I went wrong with me.  I hope me telling you about my selfishness don’t make you think ill of me, because I love my boo and we have had some incredible years together, but the fact still remains that I was in shock and disbelief. There wasn’t anything I could do about my feelings at the time.

After researching different types of diets, I went on a high protein/low carb diet which has become a major part of my everyday routine. I also workout at the gym three to four times a week. If I’m not able to make it there, I workout at home. On top of that, I also committed myself to walking at least one mile, five days a week.

I count my calories! My Fitness Pal has become one of my favorite apps! When I first began my journey, I started out with 2,200 daily calories, which I lowered over time and now I only eat between 1,200 and 1,500 calories a day.

Doing all of these things has resulted in me losing 65 pounds so far. It hasn’t been an easy journey but it’s been worth every bit sweat and every tear. Although I’m not where I want to be, at least I’m closer today than I was yesterday!

My advice to others is don’t get discouraged and don’t give up! Everyday is not going to be perfect, you will have to struggle and make sacrifices.  However, every step will be worth the struggle in the end.  When I started my journey, I wasn’t able to walk very far without being in pain. Now, I could walk for hours without any problems. I also don’t have some of the medical issues I had in the past. My asthma doesn’t bother me as often and my legs doesn’t constantly swell! It is changes like those that make me appreciate that I took the time to invest in me! It’s never too late to take the time and invest in yourself as well!  Of course, there are going to be some struggles, but success rarely comes without struggles!